A Journey to the Centre of Development

In the developed world, the word ‘Baloo’ might remind us of a loving and caring Jungle Book character but for the people in remote tribal areas and in the real jungle/forest of Karnataka where the basic necessity of life is questioned at every step, it is synonymous with growth and development.

Dr R Balasubramaniam aka Balu or Bala, the founder and executive director of the Swami Vivekananda Youth Movement (SVYM), was in Leeds recently to deliver a talk on the interesting work that the SVYM has been doing for last 30 years. The Indian community in Leeds crammed into the Shadwell village hall where the talk was being held filling every nook and cranny to listen to Dr Balasubramaniam.

The programme was organised by Dr Mamta Gupta and Dr Sanjeeva Gupta, the city’s top consultant in Pain Management and the event was supported by the All Friends Group (an upcoming Event management organisation very popular within the Indian Community in North Leeds area).

Leeds may seem very far from India, but the hearts of the non-resident Indians in Leeds is very close to the country where most of them were born and brought up.This was very much reflected in the agenda of the event. The event commenced with the performance of three wonderful Bharatanatyam dances (an Indian classical dance form) by the students of Devika Rao Dance Theatre (DRDT).

This was then followed by a brief speech from Sanjeeva introducing Dr Balasubramaniam. On listening to what Dr Balasubramaniam has achieved in life by volunteering his time for the underprivileged and tribal population, an introduction of any length would have seemed brief. To note a few points, Dr Balasubramaniam has been a doctor, an author, a development scholar, a mentor, a trainer, an activist and most importantly a social entrepreneur – a term that was new for many in the audience. At the age of 19, he started a movement called Swami Vivekananda Youth Movement (SVYM) and lived for 26 years in the rural areas of Karnataka working on development programmes. He pursued his academic degrees on leadership, organisational development and public policy after his stay in the rural areas and then was a Frank Rhodes Professor in Cornell University between 2012 and 2016. He is currently working as a visiting faculty in several esteemed universities across different countries.

He has also authored several books of which “Vivekananda as I see him” and   “i, the citizen” are a couple to note. Dr Balasubramaniam has been deeply influenced during his early life by Swami Vivekananda’s teachings. He strongly believes that today’s youth should put more efforts to understand Swamiji’s teachings instead of iconifying him. Dr Balasubramaniam’s first interaction to Swamiji’s teachings came when he started as a student in an Engineering college but could not last more than a day in the institution due to intense ragging. Dr Balasubramaniam laughs this out as a fortunate event else he would have been just another Engineering student.  Dr Balasubramaniam is also a founder of another movement called, Grassroots Research and Advocacy Movement (GRAAM), which is more focussed towards helping corporate to establish social projects and is also oriented towards public policy research.

Dr Balasubramaniam spoke fluently and passionately about his views on development. He spoke about the position that our country used to be in the past and how much development has been done in recent centuries. Our country along with China, 200 years ago, used to contribute to more than 30% of global GDP but now has more than 25% of world’s poor. He described how our country that used to have 20% of global trade share is now reduced to less than 2% of the global trade share. Around 70% of Indians do not have proper established sanitation, 60% of our country does not have access to clean drinking water and 54% of the children are malnourished. Even with this staggering astronomical numbers in a 1.25 billion population, somehow this does not prick the common man’s conscience and life just goes on. According to Dr Balasubramaniam the reasons behind this is to be seen as a failure of leadership.

The country today is in need of a slogan of ’Making India’ instead of ‘Make in India’. He spoke about the India that the non-resident Indians were not aware of and his speech was an eye-opener in that context. He mentioned that the country’s economic growth and increase in GDP is very much welcome but it alone cannot be the measure of the development index. Development to Dr Balasubramaniam is not about building airports and highways; it is not even about the roads, hospitals and schools. These should be seen as a consequence of human development rather than the very purpose of it. Development as defined by Dr Balasubramaniam is ‘a constant expansion of human capabilities’ and it can be most meaningful and lasting only when ‘Human’ and ‘Social Capital’ is created and expanded. He believes that expanding human and social capital is the best way forward and by doing this will result in Economic consequences.

Dr Balasubramaniam provided further clarification; the human capital can be in 4 domains and involves expansion of the physical, cognitive (intellectual), Emotional and Spiritual domains and we should not limit ourselves focussing only on the economic factors as this can paint an incorrect picture. Dr Balasubramaniam said that the people who would further like to know about “development” should try and read the first chapter of his book ‘i, the citizen’.

The talk by Dr Balasubramaniam was hugely appreciated by the audience. The curiosity to understand SVYM’s model of working could be seen by the large number of questions from the audience.

In relation to the queries on funding, Dr Balasubramaniam explained that the world calls SVYM as a Non-Government Organisation (NGO); however the SVYM members prefer it to be called as a Development Organisation. As can be seen from the SVYM’s financial report 2014-15, not more than 15% of fund income is from the Government and hence the focus needs to be on self-sustenance and making NGO’s as Development Organisations qualifying it as Social Enterprise and Entrepreneurship. 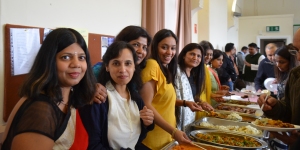 Soon it was time to conclude the discussion as the aroma of the delicious Indian meal wafted through the room. A three course meal was served to the attendees and the Indian delicacy was thoroughly enjoyed by everyone.

Lunch was then followed by a flurry of superb Bollywood dance performances.

Dr Harun Gupta then showed his skills in a very different genre of dance – Break Dance, which was equally supported / funded by Dr Ganesan Baranidharan. 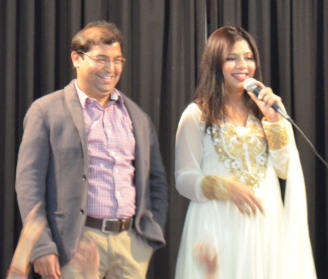 Various performances and activities followed one after another ensuring that the funding for the good cause kept flowing. A raffle tickets was organised as part of the fund raising programme and people generously contributed to it.

A few paintings created by the resident artists of SVYM were also displayed and were sold to the invitees as part of the fund raising programme.

Back stage ‘artists’ – no pun intended! Myself and Mr Dhaval Thakker

The community volunteers then pulled their sleeves up and began tidying up the hall and making sure that the hall was left in its original state. As Dr Balasubramaniam said, if ever Swami Vivekananda was needed then it is now and in the words of Vivekananda, “They alone live who live for others, the rest are more dead than alive”. Vivekananda’s books have made a difference to the life of hundreds of tribal of Karnataka by influencing Dr Balasubramaniam. The world will be a much better place to live if we have more of Dr Balasubramaniam(s). My personal takeaway from the session was a pledge to know more about Swami Vivekananda by reading at least two of his books recommended by Balu, ‘Vivekananda – His Call to the Nation’ and “To the Youth of India”.

If we try to measure the success of the event by counting the fund collected it will become analogous to measuring development just based on the GDP. Hence, even if it is important to measure how much we collected, it is immaterial to discuss it in this newsletter.

The right measure for this type of event should be how many of us got inspired. The very next day after the event, my 8 year old asked me many questions about how Dr Balasubramaniam gets the money to help the poor. She wanted to understand the problem faced by the tribal people and also wanted to check if she can be of any help to the underprivileged. Her question was, how could she contribute and after discussing a few options, she decided to trade-in her birthday party that she has been planning for at least a couple of months and donate the money for the right purpose (she is also planning to write a letter personally to Dr Balasubramaniam).  In Dr Balasubramaniam’s words – “that is the ‘Social Capital’ that this world badly needs, if it needs to stop hurtling towards self-destruction”.

If you wish to donate via GAYE (Give As You Earn) through your employer please contact your pay roll department who will help set this up.  Then contact Charities Trust on 0151 2865129 or phillipw@charitiestrust.org (http://www.charitiestrust.org.uk) and inform them your payroll number, the name of the charity (SVYM UK), charity number and account details and they will automatically receive money from your employer and send this to your chosen charity. Your contribution is fully tax exempt.  If you need further information about ways of donating please contact on sgupta6502@aol.com  or 07880 500766 or drrbalu@gmail.com or visit http://drrbalu.com/

You can reach the author at shuklabhavin@yahoo.com

My special thanks to Dinesh Kaulgud for proof reading the article.

16 thoughts on “A Journey to the Centre of Development”